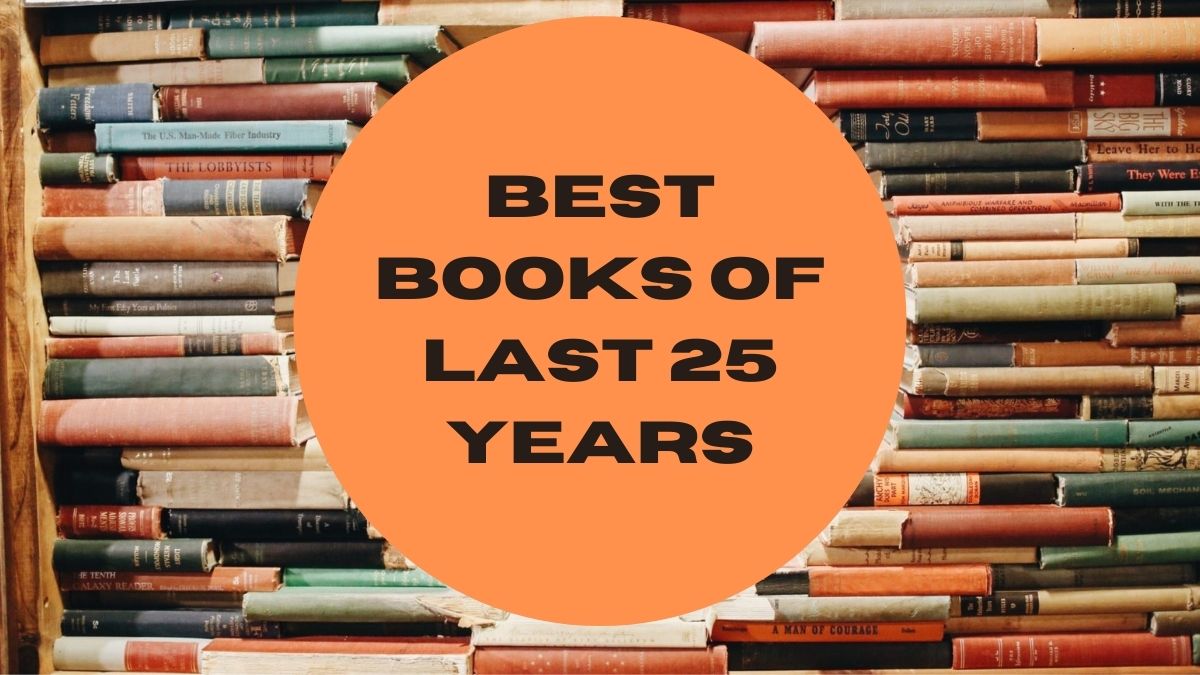 Looking for some of the best books to read, but are confused because there are a plethora of them everywhere? Don’t worry, we have got you covered. When there are truly lots of choices, it really becomes very difficult to pick the best one amongst the crowd of bests. And especially when it comes to books, it becomes more difficult because you cannot really “judge a book by its cover”, so it is important to know about the best options before buying them.

Our article will feature the top-10 books that have been published in the last 25 years and must find a special place in all of your bookshelves. You will find enough reasons to read these books on our list because this article will feature a glimpse of the plots, that will in a way encourage and arise that interest in you to read them.

Here are the list of best books published in the last 25 years that you should not miss reading:

1. The Discomfort of Evening by Marieke Lucas Rijneveld (2018)

A debut novel by the Dutch author Marieke Lucas Rijneveld, The Discomfort of Evening is a bestselling novel in the Netherlands and a winner of the 2020 International Booker Prize. A novel that deserves the first place on our list, features the story of Jas, a young girl who is 10 years old and lives in a rural village with her religious family. Jas lives with her siblings on a dairy farm, where her father spends most of the day taking care of cows and milking them.

One icy morning, Jas and her family are struck down by tragic news, news that will shatter the bond and make her parents distant from Jas and her siblings. The tragic news of the death of Jas’s elder brother leads to a lot of suffering in the family. And Jas goes on to describe the experiences of her childhood that she had to spend mostly in grief. The novel is filled with honesty, presents the true picture of death, and how Jas and her family come into terms with it, and also a series of events that are shocking, heartbreaking, and emotional. From the plot, surrounding to characterization, this book is thoroughly impressive and unique in its own way.

A political novel that recalls history, Philip Roth’s The Plot Against America is a must-read for all, for it portrays many truthful events that are closely tied with Fascism and World War II.

The novel begins with the point of view of Roth’s fictional counterpart as a child, when Charles Lindbergh, the Nazi sympathizer wins the presidency in 1940 and quickly begins to implement new policies in the country, that were going to shape the lives of American Jews, including the family of the narrator. The plot follows the effects and rise of American Fascism, political allegiances, and many other political tensions that are dipped in truth. The novel also features true pictures from World War II which makes it more significant as a novel.

Set in a dystopian world, Never Let Me Goby Kazuo Ishiguro is set in a futuristic world where human clones are created so that they can donate their organs as young adults. Cloning technology helps cure major problems like cancer because the organs are harvested from clones. The cloned donors have to give their organs one at a time until they die. As fictional it may sound, when you begin with the plot, you will forget about reality or fiction, and dive deeper into this dystopic world created by Ishiguro.

The novel is narrated by Kathy, who is a clone and works as a carer for donors in the country, she recalls her childhood, the events of her life revolving around friendship, and her upbringing, Kathy has a lot to tell about herself to the readers. The events that are unfolded by Kathy will surely touch every reader’s heart.

A novel set during the Nigerian Civil War, Half of A Yellow Sun by Adichie has much to reveal about the times of BiafranWar through its five main characters Ugwu, Odenigbo, Olanna, Kainene, and Richard.

The effects of the war are seen in the lives of all these characters who are in some way related or connected to Nigeria. Biafra’ssecession from Nigeria brings hope to all the characters for a while, that some good change is about to begin in their nature, however, when Nigeria declares war against Biafra to regain its territory, nightmares come true, and thousands of innocents lose their lives. The novel has many shocking events to unveil, and the effects of the Civil War are directly portrayed through the main characters of the novel. This novel by Adichie will win hearts and will leave an everlasting impression on anyone who reads it.

Gone Girl is the novel that made American author Gillian Flynn the New York Times Best Seller in the year 2012 and led her to worldwide fame for its gripping, mysterious, and thrilling tale. The book’s extreme success led to the adaptation of the film by the same name that was released in the year 2014 and also became a huge hit.

The novel no doubt mysterious and intriguing has an engaging plot where Amy Dunne goes missing on the day of her 5th anniversary. Her husband Nick Dunne returns home to find no trace of her however, he is the only suspect of her disappearance to the investigators. Dunne is hiding secrets, their marriage is not at all like he presents to the officials. This mysterious plot takes readers on a thrilling journey that is full of suspense, features murky characters and dark thoughts only to reveal the shocking truth at the end. Readers would love to stick to this book until the end to discover the truth. As a matter of advice, only watch the movie (if you wish to) after finishing with the book otherwise it will take away its authenticity and essence.

6. The Curious Incident of the Dog in the Night‑Time by Mark Haddon (2003)

Nominated as one of America’s best-loved novels by PBS’s The Great American Read, Mark Haddon’s modern classic The curious incident of the Dog in the Night-timeshares an amazing tale of a 15-year-old boy Cristopher who has Asperger’s syndrome, and one day discovers his neighbor’s dog has been mysteriously killed. Cristopher lives with his father, his mother was killed for mysterious reasons two years ago, and now when the neighbor’s dog is smeared with a garden fork, Christopher is accused by the neighbor of having killed the dog named Wellington. When Christopher is released with the help of his father, he is determined to find the actual killer, and his quest unveils many ugly truths that the readers must know. A plot weaved so beautifully that will keep the readers glued until Christopher has found what he had been searching for, readers cannot help but fall in love with a young detective who is autistic yet intellectual than most of his age. This book by Haddon surely deserves a place on your bookshelves.

7. The Underground Railroad by Colson Whitehead (2016)

Colson Whitehead’s The Underground Railroad is a New York Times Bestseller, winner of Pulitzer Prize and the National Book Award, that chronicles the adventure of a young slave and her quest towards freedom. A plot that is truly captivating, revolves around the life of Cora, a slave on the cotton plantation of Georgia, who is among those many slaves working tirelessly under the command of the White Masters.

Life is a living hell for Cora and her fellow slave workers, she is coming into age and afraid of many things that might come with it. But when a new, young slave arrives on the plantation from Virginia, he interacts with Cora and secretly disclosed to her the “Underground Railroad”. Cora and the young slave manage to escape, but things don’t go as they have perceived them to be, will they be able to escape? Will they succeed to head North and be free? This novel is a lot more interesting than you can think. A must-read for all, Whitehead’s novel will win all hearts and become the favorites of many.

A novel that rose to fame and was later adapted into a movie starring Kate Blanchett, Notes On A Scandalis a book for adults, that features a scandal that goes on between the young, married art teacher Sheba, and a young pupil Steven Connolly. When Barbara, the old teacher who infatuates with Sheba learns about her secret relationship with a young student, she is deeply hurt and does everything to blackmail Sheba and destroy her marriage.

A plot that is not pleasing to sound, but is extremely intriguing to read, will Sheba be able to save her marriage? How will she overcome the charges imposed upon her for having been involved in an illegal relationship with a minor? The novel is emotional, explores the psyche of the characters who are nothing but lonely and are seeking a companion in someone.

Haruki Murakami’s After Dark is a unique novel that has an unusual narration, shabby characters, and lets readers explore the nightlife of Japan, and makes it clear for them, what happens after it goes dark in the land of the “rising sun”.

The plot takes readers into the psychological of characters like the two sisters Eri and  Mari, Takahashi whom Mari comes across at a café, the manager of the Love Hotel Kaoru, the Chinese Prostitute who had been brutally beaten, and lastly a mysterious man who is a gentleman at the time of day but becomes someone else during the night at the love hotel. The novel is short, truly engaging, and takes readers on a journey of harmonious mystery and lets them discover everything “dark” going on at the time of night.

The last one on our list is a brilliant book by Stieg Larsson, The Girl With A Dragon Tattoo is a psychological thriller that focuses on the character of Mikael Blomkvist who is forced to resign from his prestigious position at Millennium, a financial magazine he co-founded with his long-time lover Erika Berger, after losing a case against billionaire Hans-Erik from the industrialist Wennerström family. But when Mikael receives a mysterious job offer from Henrik Vanger, the retired C.E.O. of Corporation, he soon joins up with the brilliant computer hacker and researcher Lisbeth Salander to investigate the case of a missing member of the Vanger family and uncover the secrets from the past that were buried silently all these years.