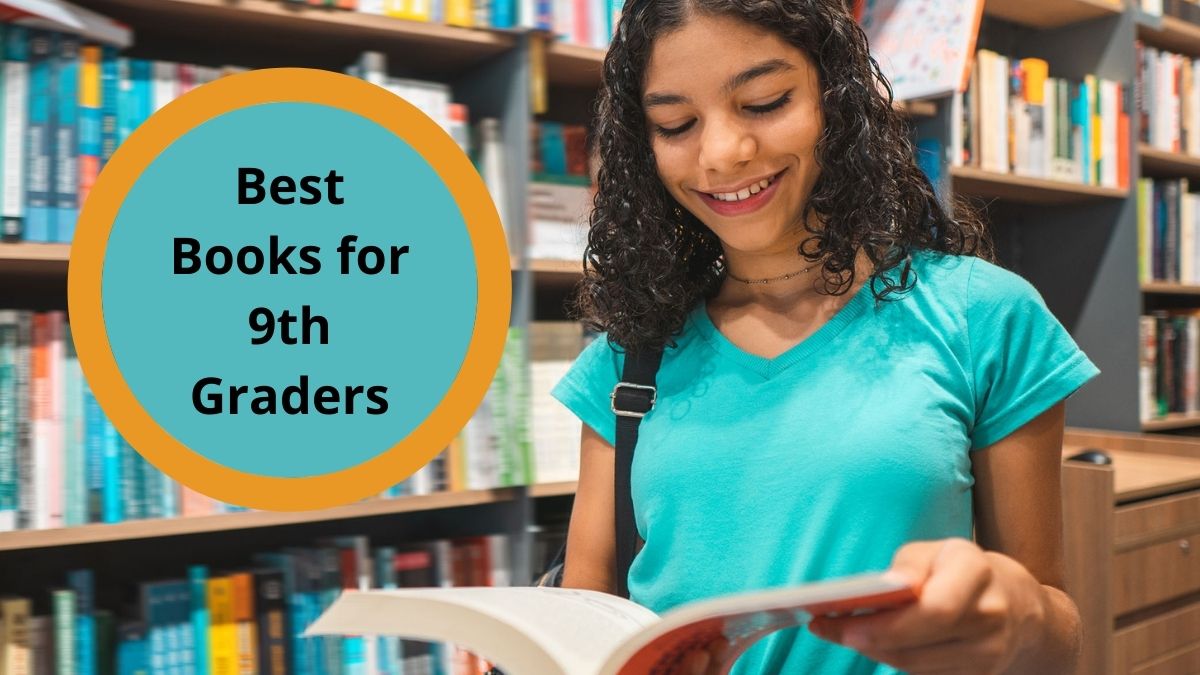 The ninth grade is often regarded as the most crucial year in high school. According to studies, what occurs in a child’s first year mostly impacts whether they stay in school or drop out. As a result, it’s critical for teenagers to locate literature that is both amusing and interesting in order to stay on track for high school education. Although many lists of books for 9th graders will include “classics” authored by dead white people (mainly men), a good list will include plenty of modern books, as well as a few comic books, that attract and capture the attention of today’s teenagers. This is why we have put together the perfect list of the top 10 best books for 9th graders that includes all sorts of books. Not every kid will have the same taste in literature. So, a top 10 list should contain all sorts of books suitable to all sorts of young minds. But this does not mean that they should read comic books all the time. You should make sure, the type of books you read is enriching and provides you with good values and morals along with the thrill and comfort of reading. That is what makes reading books a wholesome experience. So, dig into our list and curl up with your choice now!

1. Being Jazz: My Life as a (Transgender) Teen by Jazz Jennings

Jazz Jennings is one of the most recent speakers in the debate over gender identification. Among her many accomplishments, she launched a Youtube page and starred in the film I Am Jazz. Jazz suffered harassment, persecution, and humiliation as a transgender kid, but she persevered and educated others about her experiences. Jazz began her transformation at the age of five, with the help of her family. In an appearance with Barbara Walters, she recounted her tale at a time when the wider populace was less educated and far less supportive of the transgender population. Jazz was one of the most well-known advocates for transgender kids and adolescents after this historic interview. Jazz reflects on her time in the spotlight and how it influenced conventional opinions about the trans community in this biography. This book is really important as it teaches children that it is okay to be who you want to be and also not to make fun of other people’s choices and be kind.

2. The Boys Who Challenged Hitler: Knud Pedersen and the Churchill Club by Phillip M. Hoose

Knud Pedersen, a fifteen-year-old Danish boy, is embarrassed by his country for failing to oppose German troops. Knud, his siblings, and their classmates are resolved to fight the Nazis if the grownups refuse to do so. The Churchill Group, founded after fiery British commander Winston Churchill, perpetrated numerous acts of vandalism against the Germans. Despite the fact that the lads were ultimately apprehended, their adventures and incarceration generated widespread Danish opposition. Hoose intertwines his personal story with memories from Knud in this uplifting account of young war heroes in The Boys Who Challenged Hitler. The book is also the winner of the National Book Award, tells the remarkable story of these young combat warriors in The Boys Who Challenged Hitler. This well-researched and well-documented book can be incorporated into a variety of areas of the subject in the curriculum.

3. Glimmer of Hope: How Tragedy Sparked a Movement by the March for Our Lives Founders

On February 14, 2018, among the worst school killings in American history occurred at Marjory Stoneman Douglas High School in Parkland, Florida. There were seventeen pupils and teachers slain. Another seventeen people were critically hurt. In reaction to this senseless act of violence, a number of survivors organized March for Our Lives, one of the greatest demonstrations in American history and one of the world’s biggest youth-led campaigns, to campaign for commonsense gun law legislation and policy in the United States. In Glimmer of Hope, the organization’s leaders give special essays, talk snippets, and social media posts that track young experiences from the day of the massacre through their return to school two weeks after the horrific event, concluded by a march in Washington, D.C. The book reminisces one of the darkest times in the United States ever.

Lu produced a youthful rendition of the fight involving Valjean and Javert in Legend, which was inspired by Les Misérables. The Republic, a country perennially at odds with its neighbors, now occupies the western United States. June, a fifteen-year-old from one of the Republic’s richest regions, hails from an upper-class family and has been nurtured for the Republic’s top military ranks. Day, a 15-year-old slum kid, is one of the Republic’s top serious criminals. June and Day come from separate worlds and have no cause to meet until June’s brother Metias are killed and Day is named the leading culprit. June seeks vengeance for Metias’ death, and the two become embroiled in a cat-and-mouse battle. The truth of what drew them together would be exposed in a surprising turn of events. Prodigy, Champion, and Rebel are the next installments in the Legend series.

5. Opposite of Always by Justin A. Reynolds

When Jack and Kate encounter at a gathering, they connect over their shared love of Froot Loops and films till dawn. Jack is well aware that he is in danger of collapsing. Kate soon meets Jillian and Franny, two of Jack’s pals, and quickly charms them off. Kate then passes away. Their journey should have ended there, but Kate’s demise transports Jack back to their first meeting. Kate is beautiful, healthy, and delightful as she has always been. Jack believes he’s going insane, but if there’s a chance to save Kate’s life, he’ll take it. Jack, on the other hand, will learn that his acts have repercussions. When one decision leads to the death of someone close to him, he must decide what he is ready to sacrifice to save the people he cares about.

Scott is struggling as a freshman in high school. Your lunchtime money is being taken by seniors. Scott is attempting (and struggling) to grab the confidence of sophomore goddess Julia, whom he has known for years. Scott, above all, never seems to get sufficient rest, and his mother recently confirmed that she is expecting a child. Scott resolves to produce a handbook on how to survive high school after being motivated by the impending arrival of his younger sister. Scotts participates in practically every activity that high school has to offer as a result of this procedure. Scott is meticulously chronicling every moment for his younger sibling as he tries to find his place in the perplexing world of high school. This book is well written from the perspective of a young high school kid and you will definitely enjoy it.

Don’t be afraid to speak out for yourself. We’re interested in hearing what you have to say.” Melinda has known this is a falsehood since the first day of her sophomore year at Merryweather High School. She’s a loner with no friends because she phoned the cops to break up a pool party. No one wants to talk to Melinda anymore (much alone listen to her). Melinda grows progressively secluded over time, to the point where she nearly stops speaking. Art class is her sole refuge. She is eventually ready to face what really occurred at that event thanks to her art piece: Melinda was raped by an older student who also attends Merryweather. Melinda retaliates and chooses to be quiet again when she has another rough interaction with him. This book is a great read because of the sheer courage the character shows and also how well all the incidents are written. Every 9th grader will definitely enjoy this one.

Zayneb rushes to her aunt’s house in Qatar for an early and fun beginning to spring vacation after being suspended for questioning her teacher who won’t stop telling the class how “evil” Muslims are. She decides to test the latest iteration of herself in an unfamiliar environment. Then Zayneb comes into contact with Adam. Adam hasn’t gone to class since being hospitalized with multiple sclerosis. Instead, he’s committed to keeping his mother’s legacy alive for his younger sister while keeping his illness hidden from his mourning father. Adam and Zayneb are putting up a show while maintaining their true feelings hidden in their journals. This Is a heart-warming story of love, friendship, and courage.

First Test is the first book in the Protector of the Small series, and it is accompanied by Page, Squire, and Lady Knight. Keladry of Mindelan (also known as Kel) is the very first girl in the medieval kingdom of Tortall to reap the benefits of the law allowing women to prepare for knighthood. Kel confronts tremendous criticism and prejudice because not all of Tortall’s residents feel a woman is capable of such a duty. Kel, on the other hand, is adamant about achieving her objective, and not even Lord Wyldon, the training instructor who is adamant about girls becoming knights, can stop her. This is one thrilling and highly addictive book.

10. Children of Virtue and Vengeance (Legacy of Orisha, 2)

Children of Virtue and Vengeance should be at the top of your TBR list if you like Children of Blood and Bone. Zélie and Amari have accomplished in restoring magic to Orsha, but their tremendous ceremony has sparked the powers of not only the maji, but also the aristocrats. Now, Zélie must unify the Maji in an Orsha where the adversary is equally as strong as the king, while also shielding the new maji from the royal family’s fury. With civil war looming, Zélie must either find a means to unite the kingdom or watch as Orsha disintegrates.