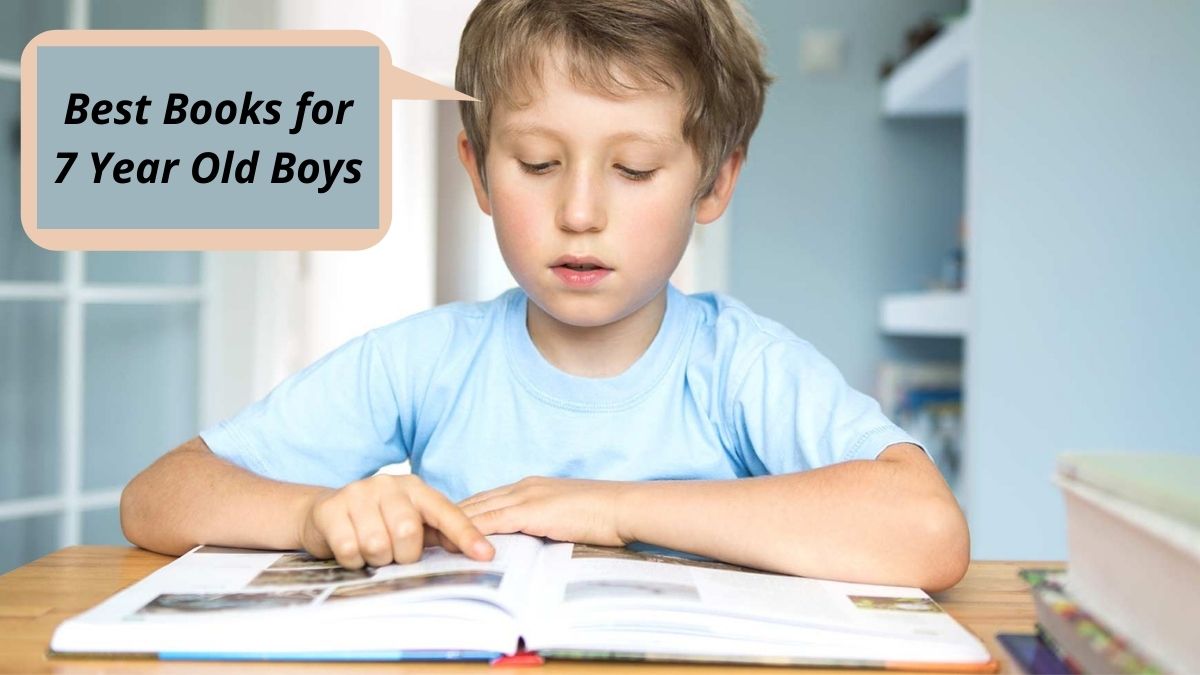 Reading at any age is the most rewarding habit that can be practiced and continued for improving vocabulary, and communication. The kind of books varies with age. The books read at any early might not amuse the child when he grows further. Seven years of age is a crucial time for the children to start serious reading as their concentration improves considerably, and they will be capable of keeping away more time to read than before. It helps to develop the skills of understanding through texts, improving the way of dealing with people and the command of good vocabulary. Reading helps to develop brain activity making it more vigilant and attentive. Once they start reading, they begin to relate the kind of happenings in the book with his surroundings. According to the classification of readers based on their age by Oxford Reading Tree, the 7 year olds fall in Stages 7 and 8. The reading process is not something that can be expected to happen suddenly. It is a gradual process that develops on a basis of what they have read at an even earlier age. The child automatically starts to use the words which he had come across while reading. The children of the age of 7 would mostly be in the second grade. Here they slowly move to read longer sentences and comprehend them. They are able to conceive the meaning of commands which are considerably longer. Some of them even try to make out the different meanings of the same word. There are a whole lot of books for 7 year olds available online including Amazon.

Here, a unique box of three books is inserted all together in a comical small packaged set. The stories are about Judy Moody who is concerned most of the time about the reason why he does not grow. He is worried about all his classmates growing up so fast, and he remains the same. He is up with several tricks to make others feel that he is growing. He turns his hair into a spike and always prefers to wear striped trousers to enhance his thoughts. The two other of the series include ‘The Incredible Super-Galactic Jawbreaker’ and ‘The World’s Worst Super-Stinky Sneakers’.

2. Stephen Curry: The Children’s Book: The Boy Who Never Gave Up

The book is sure of ultimate motivational books for children. It is about a boy named Stephen Curry who tries and tries to overcome his shortcomings to make his all-time dream to be a part of the basketball team. Due to several reasons like being short, or too weak, or not good enough to the mark, he was not able to achieve his dream. But he did not lose his mind nor give up, and his constant tries and not giving up attitude made him reach up to the NBA along with becoming one of the greatest players to ever play the basketball game. It is a kind of autobiography with pictures and illustrations.

The book set is surely considered as one of the indispensable chapter book series rated best by New York Times best-selling writer Mo O’Hara. This wild and endearing tale about Tom and his Big Fat Zombie Goldfish seems to be attractive and amusing to the young minds. Tom gives life back to the Goldfish with the help of a battery which he considers as one of the best things he had done in his life.  The zombie goldfish now seem to possess extraordinary and mesmerizing abilities which were considered as something astonishing for a pet to own.  He finds it as a relief and liberation to have a powerful pet beside him when he has to live with a brother who is also a wicked scientist who makes plans which need customary dissolution. The implausible journey of the brothers through various vengeance-filled plans and Super Zombie Electric Eel and other mystical pets.

4. Awesome Jokes That Every 7 Year Old Should Know!

The whole collection of jokes compiled to get a collection of it which tickles the ribs twist the tongue, and side to get split. The jokes are so exciting that the kids feel deeply involved in the book as they understand and read further. It improves the usage of phrases and words that these age groups should know. It not only is enjoyable for the kids but even the grown-ups of any age seem to be amused by the jokes assemblage. The illustrations provided alongside the jokes pave way for an extra roar of laughter. They can even bag a superior position among the allies with the rendering f the jokes from the book. The paperback is followed by a follow-up book, ‘More Awesome Jokes Every 7 Year Old Should Know’.

The book is the hilarious and side-splitting story of a kid who is worried about the crack in his butt which he comes to know suddenly on one fine day. It just pushes any kid to laughter from the start to the end. The boy seems to be concerned about the crack and would like it to be replaced with another which is perfect without any crack on it. He is bombarded with choices like that of a robot butt, a rocket butt, or an armor-plated butt. Along with making the readers happy and relaxed, the rhyming verses are clubbed with pleasant designs. The book is a perfect pick for kids and parents and is sure to make the children not keep it down once they got the taste of it. The silly jokes make the kid have the book all the way with them, no matter what.

6. My Encyclopedia of Very Important Things

An encyclopedia for kids enriched and stuffed with information regarding the universe, world, humans, planets, plants, and animals. The book has the form of a storybook pattern enriched with graphical elements which make the reading interesting. The book is perfect for kids of 7 years to get informed with all the possible info around the globe. The details about the world might feel inappropriate for the kids and they would avert from reading the book. So all the suitable information needed for their age is enclosed in the specified encyclopedia with attractive and colorful pictures and illustrations. The overview of contents included in the book range from the galaxy, planets to dinosaurs, from animals (how they behave, communicate and live), and people (the ancient cavemen, Egyptians, primitive explorers). The information would appear so jam-packed, but the way they have put it across doesn’t look to be boring and an excess of information for youthful, and inquiring brain. The texts are lively, and the photographs resemble closely real and live ones. The book is complemented with a bookmark ribbon to help the young minds to keep up the progress of reading.

A book overloaded with mind sticking challenges which include Mazes and Puzzles to twist the brain in every way possible. More than 200 of such challenges are incorporated in the book. The activities like word search, puzzles with numerical, joining dots, word puzzles, spotting differences, counting with pictures, and the games which involve matching are some among them. The mazes are really interesting and mind-blowing which helps to keep the child busy along with providing him fun and leisure.  The book is apt for the age group 6 to 9. The book is a perfect associate for any time of the day or time for the child. It is a wonderful gift for any occasion and a superb keep.

Children mostly get excited by various things related to engineering. They tend to learn, try out and find fun in every aspect of the engineering skill. The child is enriched with activities pertaining to the engineering skills inside them. It is a fine choice for children between 5 and 10 years of age. It helps improve imagination and inquisitiveness. The book is filled with exercises that arouse interest in engineering and they learn about the various working principles and methods. Around 50 STEAM exercises are planned for kids with systematic guidance, colorful illustrations, and simple experiments with explanations of the working process. The book contains activities which can be done on their own like making a tower using toothpicks, phones from paper cups. Learning is accomplished through playing. These techniques enable them to solve issues and improve their thinking ability. The topics are based on Science, Technology, Engineering, Art, and Math. The job profile of engineers in various domains and the kind of work done by them all are explained as per the understanding level of the kids. These will surely enhance their creativity, growth, and comprehension making the book a must-buy.

9. Me and My Feelings: A Kids’ Guide to Understanding and Expressing Themselves

A 7 year old doesn’t mean that a kid of that age is not with feelings. As a grown-up, they too have thoughts of anger, happiness, jealousy, excitement, anxiety, and sorrow. It may be due to any reason which might seem to be silly for the grown-ups. The book acts as a helping hand to help manage the feelings of the kid. It explains that it is completely natural for everyone to have any kind of feelings, and the ways to overcome the after-effects of certain rigid feelings. Several bodily exercises and self-motivation techniques are also recommended in the book for them to follow to keep their mind composed and calm. The children understand that it is absolutely normal to have feelings of any kind, and they trying of understanding other’s feelings too. There are fun-filled implementations to understand the self especially for the kids of the age group from 7 to 10.  The book guarantees the ability to understand themselves better and to have a greater organize of their thoughts and emotions all by themselves. Any kid of the age after reading it, would be capable enough to have control over their feelings and clearly apprehend what’s going on inside them.

10. Diary of a Minecraft Zombie Book: A Scare of a Dare

The word ‘Zombie’ is rather a terrifying one than something funny or comical. But the book first in the series is completely entertaining where the kid gets to know the world from the prospect of a real zombie who is 12 years old from the extremely famous game Minecraft. The readers get to have a sneak peek into the reality behind the void eyes and the lifeless look that is usually visible on a frightening zombie’s face. The book is sure to blow off the pre-determined information about zombies in Minecraft. Most kids of the age 7 or above are passionately obsessed with Minecraft and they would be seriously excited to leap into the Adventures of the zombies in Minecraft.