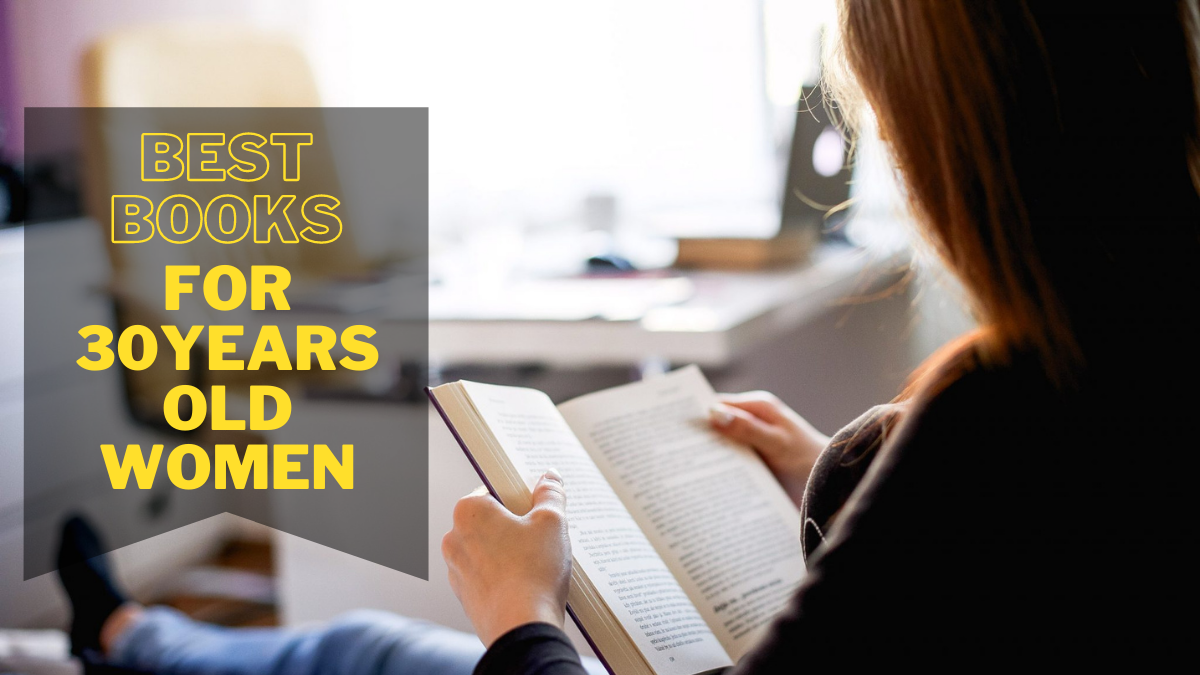 In your 30s, you are at a stage of life when you have established yourselves, got your dream jobs, and perhaps are enjoying your phases of motherhood. Your 30s are a lot more composed than your 20s, there is no rush of establishing yourselves, and there is no place for bad decisions that you’ve been making in your teenage or 20s. Since the 30s is the time when your life seems more sorted and easy-going, why not choose to celebrate it leisurely by reading some of the most moving, captivating, motivating, and heart-touching books?

Since the 30s is a time of your life where you are bound by many commitments, you should take out some “me-time” and read these amazing books featured in this article. If you are confused between what to read and whatnot, then here are some of the best books that should definitely find a place on your bookshelves.

From being kept away from education to being raised only for becoming “marriage material” or a possession to be passed on to men in different stages of life, women have been through a lot over centuries. But with the emergence of ages like Victorian and Modern, women began to regain their voices and fight against patriarchy, and a wonderful example of such is The Second Sex. This book is historically remarkable, holds one of the most important places amongst books on “Feminism” and “Women Empowerment”, and instills confidence among women along with rational reasons and ideas.

2. The Discomfort of Evening by Marieke Lucas Rijneveld

A debut novel by the Dutch author Marieke Lucas Rijneveld, The Discomfort of Evening is a bestselling novel in the Netherlands and a winner of the 2020 International Booker Prize. A novel that deserves a place on this list because it is captivating, features the story of Jas, a young girl who is 10 years old and lives in a rural village with her religious family. This coming-of-age novel takes readers through a whirlwind of emotions and provides deeper insights into a life living with the harrows of death.  Jas lives with her siblings on a dairy farm, where her father spends most of the day taking care of cows and milking them. One icy morning, Jas and her family are struck down by tragic news, news that will shatter the bond and make her parents distant from Jas and her siblings. The tragic news of the death of Jas’s elder brother leads to a lot of suffering in the family. And Jas goes on to describe the experiences of her childhood that she had to spend mostly in grief. The novel is filled with honesty, portrays the true pictures of harsh winters and death, and how Jas and her family come into terms with it. There are also a series of events that are shocking, heartbreaking, and emotional. From the plot, its aura, or surrounding to characterization, this book is thoroughly impressive and unique in its own way.

3. We Should All Be Feminists by Chimamanda  Ngozi Adichie

As the title of the book suggests, shouldn’t “we all be feminists?” We absolutely should, and Adichie tells us why through her amazing book. The award-winning, bestselling author of Americannahpresents readers with a series of personal, powerful essays that largely focuses on Feminism, and its importance in the 21st Century.

From recording her own experiences, talking about the realities of sexual politics to the necessities of understanding Feminism and the worth of “equal rights” for minorities and for all, this collection of essays will make you feel deeply connected. With intimate thoughts and ideas, and some heart-touching real-life examples, Adichie presents readers especially women, with a book that is a must-read for women to become confident, powerful, independent, and mentally strong.

4. The Goldfinch by Donna Tartt

The Goldfinch by Donna Tartt is the last book on our list that has been regarded as the best of the decade, follows the story of Theodore Decker, who loses his mother at the New York City Metropolitan Museum. Theo recalls the moment, 10 years ago when he came to the city of New York with his mother to the museum, to witness the unique piece of art “The Goldfinch”. And there is a sudden bomb explosion that leads to the death of Theo’s mother, others around them are found dead or badly injured. Theo somehow survives and runs from the spot with the masterpiece, but on his way encounters an injured man who presses a ring into his hands and says something about a business. From that day, Theo’s life changes completely, having been orphaned, he must choose his own ways to survive. The main interest lies within the masterpiece “The Goldfinch”, the old man’s ring, and a business that he said about. Theo’s coming-of-age quest has many intriguing events to unfold.

A book that brought Toni Morrison in the limelight for her incredible and heart-touching plot, Beloved deeply moved readers and was later adapted into a film.

A New York Times Bestseller, Beloved usually deals with racial issues, the inhuman treatments imposed on Blacks by the White oppressors of America. Slave plantations, abuses, murders, and rapes, there are so many incidents that will make you deeply emotional. The plot revolves around Sethe, born a slave but who escaped to Ohio to be free. 18 years later, she is back into the life of her slavery, she is abused, raped, and also pregnant. Sethe keeps on recalling her sweet memories of freedom, her life at the farm, and when she gives birth to a still child, she only carves a single word at her little, nameless girl’s tombstone- “Beloved”. Sethe has so much to bear, so much to tell, and so many bitter feelings to hold, the novel is undoubtedly going to touch your heart, and leave an everlasting impression.

Call it a Classic or a work of Fiction, Circe by Madeline Miller has weaved an intriguing plot that shares its relevance with Greek and Latin mythologies. Circe, the daughter of a sea nymph and Titan the Sun god Helios, everything seems to be perfect unless Circe discovers the art of Sorcery, and turns a fisherman into a god. When the fisherman is flattered by the beauty of another sea nymph named Scylla, Circe becomes extremely jealous and turns her rival into a horrendous sea monster. Circe is punished for her crime and the events that follow later in the novel are more interesting. Looking back at mythical tales through a modern mind and eyes is going to be an amazing experience for readers.

7. Gone with the Wind by Margaret Mitchell

A novel that is a winner of the Pulitzer Prize, was originally published in the year 1936, and till then it has been regarded as “The Great American Novel” that is worthy of all the praise. This successful novel also became a successful film adaptation by the same name, which was also a huge hit across the world.

From exploring the depths of human passion and relationships to the era of Civil War and Reconstruction, both the novel and the film focus majorly on these important themes and make it truly enticing to read and watch. Gone With the Wind is a sweeping, romantic story that has been impressing people for over the last 70 years, and will continue to do so, for it is a must-read and must-watch classic of all time.

8. The Ministry of Utmost Happiness by Jhumpa Lahiri

One of the best modern Indian writers, Jhumpa Lahiri’s The Ministry of Utmost Happiness depicts a tale of contemporary India where the lives of several characters are interconnected even though they aren’t aware of it or are complete strangers. In her novel, Lahiri features the capital city of Delhi and the beautiful state of Kashmir where the characters undergo some incidents, but their experiences are interconnected with each other.

Lahiri in her novel explores the themes of religion, relationships, and the discovery of trans-identity. Explore the Indian subcontinent, dive deeper into the lives of the characters struggling under the conventions of Indian society. Through this well-woven,  engaging plot witness the cityscape (Delhi) and the valley of mountains (Kashmir) come together to tell an intimate story

A novel that is perfect for women in their 30’s, Theodore Dreiser’s Sister Carrie is a remarkable book of a woman rising from being invisible to reaching the “hall of fame”. Not many know about or have heard the name of Dreiser’s celebrated work, which has a beautifully weaves plot full of ups and downs, focusing on the character of Carrie Meeber, a young, beautiful woman with sky-scraping dreams.

From coming to Chicago as a timid young girl of 18 to becoming the famous and most beloved actress of theatres in America, Carrie’s journey is truly captivating, her transformation from dating men for money as Carrie Merger to becoming Carrie Madenda and rejecting all proposals of rich men, Carrie has to go through a lot, and eventually end up to behave everything she ever desired to have and be, but how will she escape the loneliness that haunts beautiful women like her? You would certainly not regret reading this remarkable book.

The first Northern Irish writer to receive the Booker Prize in Fiction in the year 2018, Anna Burns has received a lot of appraisal for another remarkable work of hers. Milkman is set in Northern Ireland, the story revolves around an unnamed city and an 18-year old girl whom Burns refers to as “Middle Sister”. Throughout the novel, Burns presents the characters with no real names but by what they represent, such as the “maybe-boyfriend” of a middle sister whom she’s in a relationship with, the middle-aged Milkman who approaches middle sister to date with him, the Tablet-girl who is insane and poisons random people and many other minor characters.

The story revolves around Middle Sister and how her life is threatened after being approached by the Milkman. Various events follow after Middle Sister refuses the Milkman’s offer. Will she be able to get rid of him? Will her maybe-boyfriend believe the disgusting rumors spreading about her? Readers have a lot more to discover by the end of the novel.