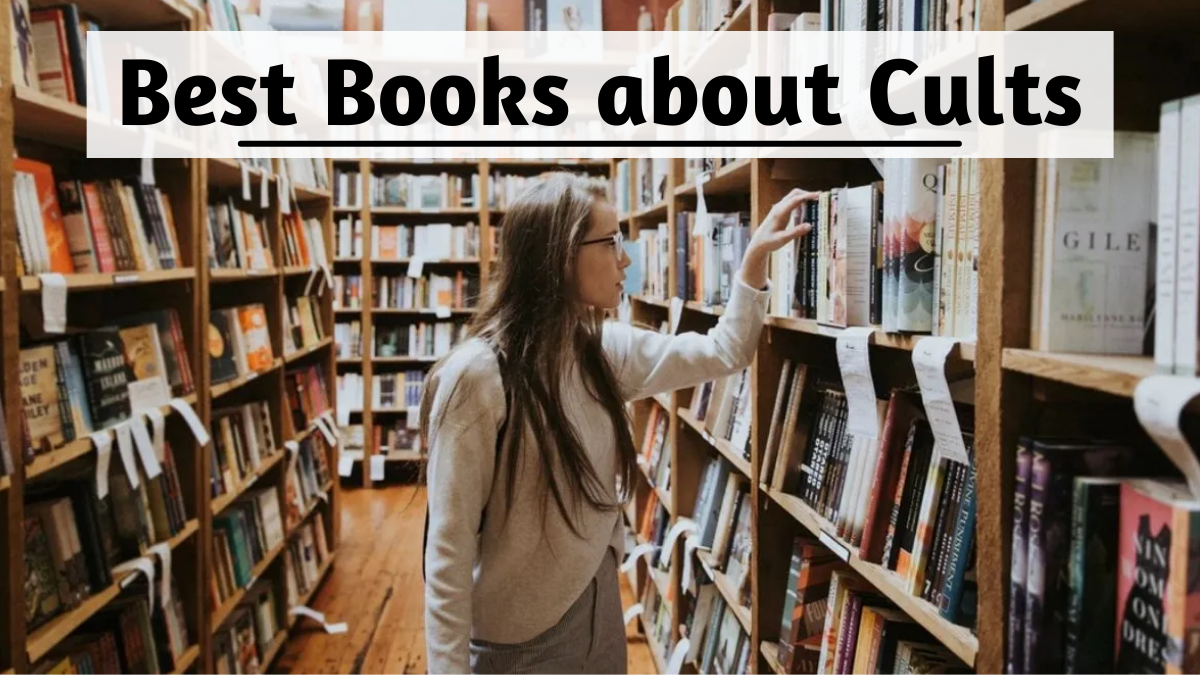 Books based on Cult are undoubtedly compelling and engaging and fascinate you with their ever-engaging plots. Cults are so popular among readers because, they have the ability to alter a reader’s life or influence them, or even bring some positive change. Cults can be about Religion or focus on some darker themes including Psychology, Crime, Sexual assault, Paedophilia, violence, and so on, either way, they are super interesting for sure.

If you are looking for some of the best Cult books to add to your collection, then here are some of them that you just cannot miss. So, Cult lovers, here are the books that should definitely be a part of your reading list.

1. The Handmaid’s Tale by Margaret Atwood

A novel that later turned into an extremely popular Netflix series, The Handmaid’s Tale by Margaret Atwood is set in a dystopic world, that deals with religious, political, and sexual issues in the most unique way. The novel focuses on the character of Offred, who is a Handmaid in the Republic of Gilead, a totalitarian and theocratic state that has replaced the United States of America. Because there is seen a dangerously low reproduction rate, young women like offred are brought here in this politically powerful world of Gilead to bear children for powerful men and live a life that is much equivalent to imprisonment.

Offred is the narrator and the protagonist of the novel, she is intellectual, perceptive, and kind, and the readers witness a painful, heart-touching tale through her eyes, an experience that one cannot forget. Deprived of her husband, her child, her freedom, and even her own name, will Offred be able to survive in this dominant world, or will she manage to escape somehow? There is so much more to unveil and explore in this novel.

2. Helter Skelter: The True Story of the Manson Murders by Vincent Bugliosi and Curt Gentry

Helter-Skelter: The True Story of the Manson Murders records the case of murders committed by Charles Manson and his followers. The plot features a detailed account of the trial, evidence, and interviews with the witnesses, who eventually made it possible to put these dangerous criminals behind the bars. The novel has been given its complete form with the help of ghost-writer Curt Gentry, who made it possible for Bugliosi to win the Edgar Award, and to be regarded as the best true crime book of the year.

This book is definitely going to entice readers who love to read crime and mystery novels, and prefer suspense over straightforward plots.

3. Seductive Poison: A Jonestown Survivor’s Story of Life and Death in the People’s Temple by Deborah Layto

Deborah Layton’s Seductive Poison is told from the point of view of a high-level member of Jim Jones’s Peoples Temple for seven years and features the tale of a woman, who was seduced by one of the most notorious cults in recent memory and how she found her way back to sanity. A thoroughly engaging plot written in an impressive style, Layton’s novel records her experience of being a member of the Peoples Temple for seven years, she escaped from home leaving behind her mother, her older brother, and many friends, realizing her mistake and finally finding her way back home amidst life-threatening dangers.

Layton departed for Jonestown, Guyana, the promised land nestled deep in the South American jungle, and perceived that something is wrong. Reverend Jim Jones always spoke about mass murder, but eventually came to realize that he has control over all the minds. When Layton pleas for help from the U.S Government, things begin to take a different turn. A thoroughly engaging novel that will keep you glued till the end, Seductive Poison is one of the best Cult featuring books you’ll ever come across.

4. Scarred: The True Story of How I Escaped NXIVM, the Cult That Bound My Life by Sarah Edmondson

Based on the true-life story of Sarah Edmondson, Scarred features the account of Sarah’s recruitment into the NXVIM cult founded by Keith Raniere, and the 12 years she spent with the organization and its norms. This novel is full of personal photographs and detailed information, that leads readers into the depth of witnessing unethical practices. Sarah on becoming a part of the NXIVM slowly began to realize the illegal things that were happening inside, and how these things were turning into abuse.

Sarah presents the readers with an experience, that is going to fascinate lovers of true crime and cults, and through her experience, she tries to reach out to those, who have once gone through the same kind of fate. Sarah’s inspiring story of abuse, escapade, and redemption, and her harrowing fight to get out, and help those who are suffering, is surely going to win hearts, and leave an everlasting impression.

5. The Followers by Rebecca Wait

A book truly for Cult lovers, Rebecca Waits’ The Followers is about a struggling single mother, who falls under the clutches of a charismatic cult leader, but her rebellious 12-year-old daughter isn’t quite happy, and can perhaps already sense the danger. Nathaniel, the prime focus of the novel is the founder of the Ark, a small, sealed-off religious group operating from an isolated dwelling in northern England, Stephanie being a single mother, hungry for emotional intimacy, falls prey to Nathaniel’s seduction and joins the Ark’s community, on the moors, where women are deemed “weak and open to the devil,” wear long dresses and never leave the compound.

Stephanie’s daughter Judith is skeptical and does not like her mother’s new boyfriend, and her decision of joining the Ark Community. As the novel begins to unfold, more dark things begin to appear, and eventually, Stephanie and Nathaniel have to serve in prison, and Judith is on the brink of losing her sanity.

6. The Great Believers by Rebecca Makkai

The Great Believers by Rebecca Makkai revolves around the stories of a group of friends, where most of them are gay men diagnosed with AIDSin Chicago during the mid-80s to the early 90s, and the story of a woman in search of her estranged daughter in Paris, 30 years later. The novel shifts between the narratives of Yale Tishman who is a gay man living in Chicago, and Yale’s friend, Fiona Marcus, who reflects on her memories of Yale and his friends 30 years later.

Yale is close to Nico, Fiona’s brother who dies of AIDS, and slowly, this disease grows as an almost uncontrollable epidemic. Thirty years later, Fiona is in Paris tracking down her estranged daughter who disappeared into a cult. She returns back to unwind the Chicago crisis, she finds herself finally grappling with the ways AIDS affected her life and her relationship with her daughter, and the novel goes on to depict, how Yale and Fiona struggle to find goodness in the midst of death, sadness, and disaster.

A novel that deals with the horrific Tokyo Gas Attack in 1995, Haruki Murakami in Underground portrays the incident of a clear spring day when five members of a religious cult unleashed poison gas on the Tokyo subway system. With an aim of discovering the reason behind this horrific incident, Murakami takes account of people who barely managed to escape this catastrophe.

Murakami depicts the Japanese psyche, the fundamental issues that led to the attack, and unfolds the incident so clearly, that you can almost picture it in front of your eyes. This book of course maintains the goodwill of Murakami’s spontaneous style and detailed form.

8. The World in Flames by Jerald Walker

A novel that you can declare as autobiographical because it features Jerald Walker’s experience as a young black boy living with blind, African-American parents, and his experiences of being a member of the church whose beliefs he finds not only confusing but terrifying. The World in Flames is set in 1970 and revolves around the underpinning tenet of Herbert W. Armstrong’s Worldwide Church of God, whose members were believed to be divinely chosen and all others would soon perish in rivers of flames.

This cult tale features fear, intimidation, threats, and a hodgepodge of religious beliefs through the eyes of Walker, and leads readers into the experience of witnessing what he has witnessed as a child surviving with blind parents.

9. The Girls by Emma Cline

Set in Northern California, during the violent end of the 1960s, The Girls by Emma Cline focuses on the character of Evie Boyd, who is one day, fascinated by the freedom and carelessness of the girls in the park. Evie is drawn towards this group and meets Suzanne, who is mesmerizing, and makes Evie a part of a soon-to-be infamous cult, led by a charismatic man.

Hidden among the hills, there lies the group’s sprawling ranch, and Evie becomes desperate to become a part of this attractive yet mysterious group. The more time she spends away from her mother, Evie becomes closer to Suzanne, and she does not realize she is coming closer and closer to unthinkable violence. The events in the novel go through unexpected turns and make the plot more twisted and interesting, The Girls is surely worth reading.

10. The Girl in the Red Coat by Kate Hamer

The last one on the list, Kate Hamer’s The Girl in the Red Coat is a truly interesting cult fiction that features the story of eight-year-old Carmel, the titular red-coated girl, who is driven away by a man who claims to be her estranged grandfather. Beth is a single mother who is determined to find her daughter and must face all the obstacles to uncover the truth behind Carmel’s sudden disappearance.

The novel keeps on shifting between the narrations of Carmel and Beth, which keeps maintaining the tension of the plot. Will Beth find Carmel eventually and save her from the clutches of this dangerous old man? Will Carmel stop believing the lies this mysterious man keeps on telling her? There is so much more to explore in the plot, and the ending is of course shocking.

These were some of the best books for Cult lovers that are absolutely a must-read, include these in your reading list, and make the most out of your favorite genre.