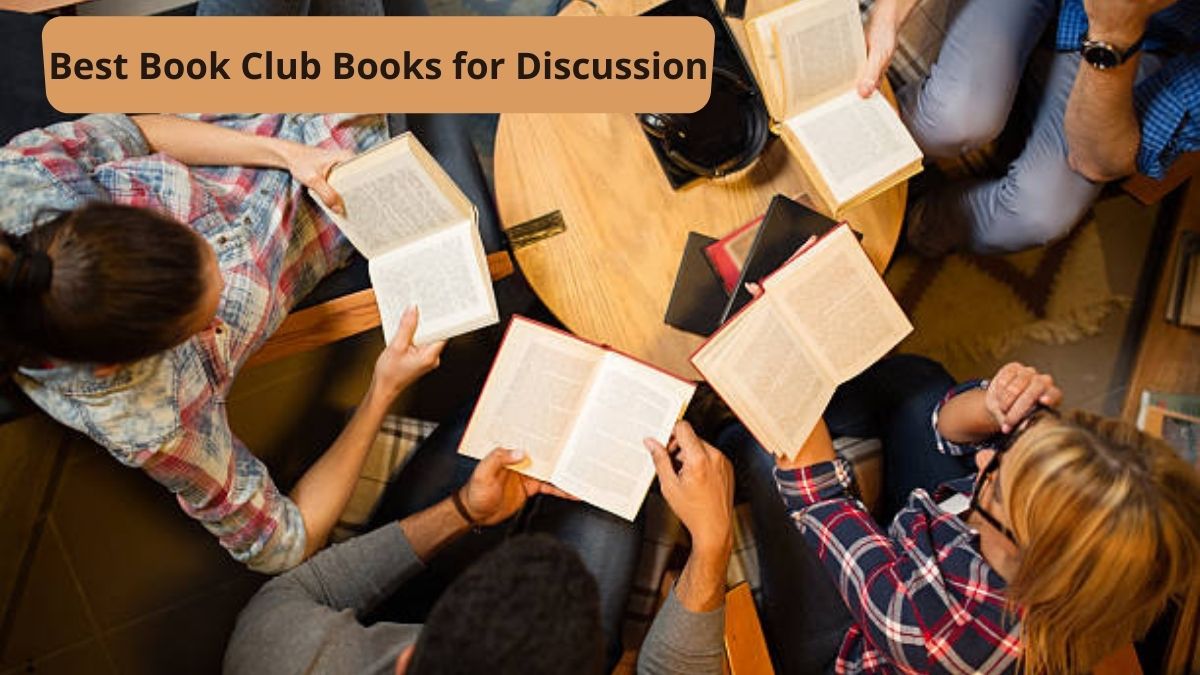 Books are one of the most precious possessions one can ever have. A book can make or break a person, it is just the power of words and the amazing works of imagination of authors that keep readers glued to their hundreds of pages to ultimately discover the truth or author’s intention towards the end. Book Clubs are the best places to visit for book lovers, it is generally a place where readers meet to discuss books they have read, and share their opinions and views with the other members. These discussions are truly interesting and engaging and help to connect strangers through a single bond of reading.

Our list consists of books that are not only worth reading but also can be a great choice for discussing over with your group at Book Clubs. Check out which one you would love to read and engage in an intriguing discussion later on.

1. An American Marriage by Tayari Jones

An American Marriage by Tayari Jones is a novel that portrays the complications of human relationships especially marriage, in this modern world. This book was selected by Oprah’s Book Club in the year 2018 and has been praised by many including former U.S President Barack Obama. This novel by Jones has also been praised by New York Times and has been longlisted in the 2018 National Book Award For Fiction.

The plot revolves around Celestial and Roy, a young couple married for 1 and a half years. Everything seems to be fine until one day on their way to Roy’s Parent’s home they stop by at a motel to spend the night, and Roy is accused of raping the old lady he had helped earlier that day. This devastating event is the beginning of shattering their trust and faith in each other. Will Celestial be able to save her husband from the false accusation? Or does she really trust him? The novel is more complicated and interesting than it seems. This novel by Jones is undoubtedly a great read for adults and even better for book club discussions because it lets readers explore the complexities of human life and relationships.

2. The Book Thief by Markus Zusak

Markus Zusak’s The Book Thief remains as one of those extraordinary books whose narration and the plot will leave readers in awe. Number 1 New York Times Bestseller and nominated as one of America’s best-loved novels by PBS’s The Great American Read, this novel is bound to impress every reader.

The novel’s uniqueness lies from the very beginning where the narrator is “Death”, and through death’s eyes, the readers witness the story of a 9 year old girl named Liesel Meminger who is a German and is devastated by the effects of World War II. Her journey of losing her biological parents, coming into a different place to live with Hans and Rosa Hubermann in the small town of Molching in 1939, discovering the wonders of reading and writing to stealing a book from the burning by the mayor’s wife Ilsa Hermann, who later invites Liesel to read in her library. Liesel uncovers many secrets of her identity and comes across many horrendous events. This book will keep readers glued to the text until the end.

This book is also great for discussion for it evokes many controversial topics including WWII, the Nazis, and the political tensions between countries.

3. The Storied Life of A.J. Fikry by Gabrielle Zevin

The Storied Life of A.J Fikry by Gabrielle Zevin is a novel full of humor, romance, and funny events that are thoroughly entertaining to read. The novel revolves around the titular character A.J Fikry who owns a bookshop on the fictional Alice Island off the coast of Massachusetts, he is a widower and lives alone self-occupied. AJ’s bookshop is experiencing a huge loss, his sales have worsened, and the most horrible thing that has happened to him is his rare possession, a collection of Poe poems has been stolen. His bad times lead him to isolate himself from all the people he was in touch with, and when all hope was gone, a mysterious package arrives and there begins a new journey. The novel is full of intriguing events revolving around A.J, there is a lot of humor and entertainment throughout his journey. AJ’s story should be read by all and will be absolutely fun to discuss with your groups.

4. Kafka on the Shore by Haruki Murakami

One of the most popular books ever written by Haruki Murakami, The Kafka on the Shore has received international recognition and appraisal for its amazing plot. A coming-of-age novel that focuses on the character of Kafka Tamura, who runs away from his home on his fifteenth birthday. Kafka learns about the horrendous curse, that he like the historical character of Oedipus is destined to kill his father and share an incestuous relationship with his mother and sister, Kafka escapes from his home to stay away from his curse.

The events that follow in the novel take Kafka into unknown places, uncertain situations and meet strangers who play roles in molding his personality. Kafka’s challenging journey of staying away from home, and becoming a sensible adult is truly amazing to read.

5. Klara and the Sun by Kazuo Ishiguro

A Good Morning America Book Club Pick and New York Times Bestselling novel, Klara and the Sun by Kazuo Ishiguro features a heart-touching narration and will leave an everlasting impression on readers. Ishiguro takes readers to the future through his plot that revolves around robotics and technology. The titular character Klara is a robot, an Artificial Friend (AF) made for providing companionship to children. The parents have become less interactive with children so they buy robots like Klara to be their child’s friend.

Klara is Intelligent, she perceives the world from the window of the AF store, and the narration begins with her experience at the store where she has some friends. Many children come and go by every day at the shop, but Klara’s favorite is Josie who promises to buy her one day when she has enough money. J I o s I e eventually returns to the shop and by sclera and buys Kerala from the store. It is from here Klara’s life changes and the readers come across many interesting events. This novel by Ishiguro is undoubtedly the best one you will read and will have lots to discuss.

6. The Midnight Library by Matt Haig

A book that received the Goodreads Choice Awards for Best Fiction, The Midnight Library by Matt Haig is about the journey of Nora Seed, who commits suicide to explore the grey space between life and death.

The novel begins with a Prologue that reflects the life of Nora before 19 years of her committing suicide and then moves to the time when Nora’s life becomes a mess, the events taking place in her life lead her to depression and eventually to suicide. When Nora wakes up, she finds herself in a place filled with books that she names as “midnight library” a place in between life and death. The novel is full of interesting events, and Nora’s unbelievable journey has a lesson for all.

7. Such a Fun Age by Kiley Reid

A Reese’s Book Club Pick, a New York Times Bestseller and longlisted for the 2020 Booker Prize, Such a Fun Age by Reid has also been featured in popular magazines including Vogue, Elle, and Chicago Tribune. A remarkable debut novel, where the plot revolves around two main female characters Emira and Alix, Emira is a young black woman in her mid-20s and is uncertain of her career and life ahead, whereas Alix is white and is established, leads a happy life with her family. Emira meets Alix when she comes to babysit Alix’s 2 year old daughter, but later her life turns upside-down when she is accused of kidnapping the young child when she takes her to the grocery store late at night for an emergency. Things keep on changing and Emira keeps on struggling financially to survive. The story follows many events that affect Emira and Alix’s lives, these racially diverse women come across many problems but are tied to a single bond of feminity.

This is a great book for discussing Racism, Feminism, and failing to achieve financial goals (American Dream).

Fredrik Backman brings out a tale of a grumpy old man known as Ove, who is regarded by his neighbors as a “devil old man from hell”. Ove is a widower, his wife Sonja has recently died, he lives alone and is angered by all the people around him. He shouts at people out of hatred as if they are burglars, and everyone around him just stays away. After losing his job Ove decides to commit suicide, he tries multiple times but fails, everything around him begins to change when new neighbors come to stay by. Parvaneh, an Iranian woman who is Ove’s new neighbor keeps on interacting with him for daily issues. Will Ove change as the person he is? Will he succeed in committing suicide? Why is it that an Old man needs to commit suicide? There are many questions to discover the answers, and discuss them over. A Man Called Ove is surely going to be an amazing read for adults.

9. In Five Years by Rebecca Serle

Rebecca Serle presents the readers with a different kind of love story in her work In Five Years. A New York Times bestseller and a Good Morning America Book Club pick, the novel focuses on the character of Dannie Kohan who is a successful lawyer who has a loveable fiancé and a best friend. Dianne is about to get engaged when she foresees things that are going to occur in her life five years later. She sees a fancy apartment and a man she lives with but strangely that man is not his fiancé, this worries Dianne and she calls off her wedding. She keeps on seeing events from her future and the man keeps on appearing frequently until after 4 years she finally meets the man, who turns out to be her best friend’s boyfriend Aaron Gregory. Everything in her life changes from this event and takes unexpected turns. The novel has the most unexpected twist that you need to uncover.

10. The Curious Incident of the Dog in the Night-Time by Mark Haddon

Nominated as one of America’s best-loved novels by PBS’s The Great American Read, Mark Haddon’s modern classic The Curious Incident of the Dog in the Night-timeshares an amazing tale of a 15 years old boy Cristopher who has Asperger’s syndrome, and one day discovers his neighbor’s dog has been killed. Cristopher lives with his father, his mother was killed two years ago, and now when the neighbors’ dog is smeared with a garden fork, he is accused by his neighbor of killing the dog named Wellington. When Christopher is released with the help of his father, he is determined to find the actual killer, and his quest unveils many ugly truths. A plot weaved so beautifully that will keep the readers glued until Christopher has found what he had been searching for.