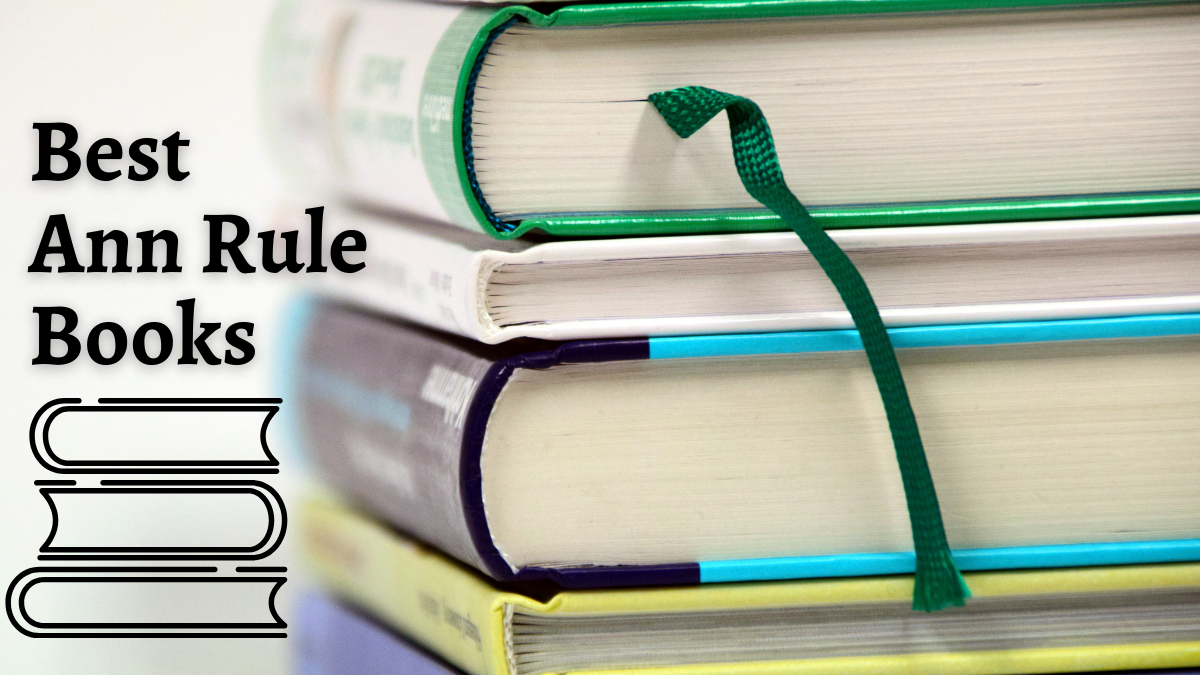 Are you the kind of reader who loves to read spine-chilling Crimes or stories of the most gruesome Serial Killers? If yes, then these nightmarish true-tales have found their way into the novels of Ann Rule, which will make you love the genre of Crime/Mystery even more. How many authors do we come across every day who record Crime and Mystery tales in the most enticing way? There are many of them right now, isn’t it? But what if you are told that Ann Rule is different from all of them because she is too dedicating and includes even the minute details? Yes, you heard it right. Ann Rule is one of those authors who has done rigorous research on some of the most horrific, nerve-chilling Crime cases, including the ones that include Psychopath Serial Killers, and molded that collected information into stories that you will never forget.

Ann Rule was trained in police work, a background that lends itself well to her career as a crime writer for the Seattle police department. Please note that all of her works are strictly for grown-ups because they feature violence, sex, rapes, and gruesome murders, that are absolutely not advised for teens below the age of 18. Here are the best books by Ann Rule that should surely find their way to your bookshelves, and remain as your favorites.

From the number 1 New York Times Bestseller, Ann Rule’s first book on this list is one of her best serial-killing crime stories that is based on true, horrifying events. The 1-5 Killer covers the events of rapes and murders that are enough to send chills down your bones.

Randall Woodfield has all that he wants, is blessed with charm, is handsome, and is an award-winning student, star athlete, precisely, a heartthrob. But his motives are beyond sexual pleasure, because he has an appetite for violence, and mainly torturing beautiful women to death. When these acts of violence lead him to the 1-5 highway through California, Oregon, and Washington, where he goes on to commit heinous crimes until it reaches the number of 44, anyone can hardly guess this handsome and calm face is behind those nerve-chilling serial murders. This true story of a psychopath serial killer is enough to leave you dumbstruck.

2. The Stranger Beside Me: The Shocking Inside Story of Serial Killer Ted Bundy (1980)

Another shocking, spine-chilling tale of serial-killing, The Stranger Beside Me features the story of the serial killer Ted Bundy who was actually Ann Rule’s friend for Seventeen long years. Met as workers n a Crisis Clinic in Seattle, Washington, in 1971, the author and Bundy were good friends, until she realized that she is friends with a dangerous serial killer, who was finally executed in the year 1989.

The novel revolves around Rule’s experience of discovering the double life of Ted Bundy, her painful realization that her friend for many years, the bright man Ted was behind all the murders of young women, and her difficulties of fighting her emotion as well as serving her work. The novel focuses on Ann, the impact of these incidents on her life and mind, and the details of the murders that Ted had committed, and the reason behind them. Since the novel shares biographical elements, you will be able to get a better insight into the author as a person.

3. Small Sacrifices: A True Story of Passion and Murder

A novel that became so popular that it was later adapted into a Crime Drama Film by the same name in the year 1989, Small Sacrifices is shocking, terrifying, and a powerful book of passion that leads to murder. A novel that explores unimaginable depths of darkness, and features events that are tied with passion, incest, psychological wounding, some affairs that are better to be called desperate, and lastly, surrogate motherhood.

When Diane Downs is found screaming outside in front of an Oregon Hospital, claiming that her three children have been shot and are mortally wounded, the suspicion is raised by Police to Dianne herself. But how can a mother shoot her own children who are just 8, 7, and 3-year-olds? The mystery is darker than you think, and the outcomes will leave you truly shocked and speechless. Hard to imagine, this tale has been taken from a true event.

Based on America’s deadliest serial murder, Green River Running Red brings out the true story of the most haunting serial murders that continues to haunt the residents of Seattle even today. A total of 49 women fell prey to the murderer, more than two decades of investigation could not come to the conclusion who the murderer was, until one day, the killer is revealed, and happens to be a man from Ann’s neighborhood.

These haunting chronicles of serial murders continued to threaten the lives of females living in the Seattle area for about 20 years. The most frightening and nerve-chilling events you will come across, you will remain glued to the book without blinking, unless the psychopath murderer is brought to light, and is punished for his inhuman and unthinkable crimes.

A part of the Crime Files Series, Ann Rule’s Lying in Wait is equally terrifying and shocking. Based on the realization of how close blood relations can prove to be cold-blooded murderers, and how they are often the most unsuspecting predators and can finish off your lives and so much more. Lying in Wait is basically a collection of true stories where the sociopaths commit the most heinous crimes and harm their own relations. The stories are heartbreaking and at the same time enough to give you goosebumps. Readout this book to dive into events of murders that are hard to believe, and yet it is the power of Ann, of turning even the most terrifying events into such gripping stories that you can’t stop reading.

Practice to Deceive is another gripping tale based on a true story by “America’s Best Crime Writer”, and follows an event of murder that took place at Whidbey Island, just after Christmas. When the body of Russel Douglas is discovered in his SUV hidden away at a nearby driveway, every people on the island is struck down with fear. And when the police begin to investigate the case, though at first, it seems suicide, some unavoidable clues take the case into different turns, where many secrets are revealed and many unexpected things come up.

A book that revolves around complications of marriage, extramarital affairs, sex, scandal, drama, greed and so much more, “deceive” is just the right word that fits well with the characters presented in the plot. Ann Rule’s endings have to be shocking, and this novel maintains its class.

Another book that features “true crime cases”, Fatal Friends, Deadly Neighbors is a collection that focuses on the mysterious fall of a billionaire’s son from the balcony, and other true events that seemed suicides but were cold-blooded murders. This collection of crime stories will explore the dimensions of human ill-intentions, and the darkest sides of crimes that arise through hatred, greed, competition, passion, relationship complications, and simply disturbing state of mind. This book is for you if you want to find out how friends and neighbors sometimes can make it all go wrong, and deceive in the worst way.

The Lust Killer follows the case of a man named Jerry Brudos who was behind the nightmarish murder of four young women, that he committed out of his hunger for sex and rage. Jerry Brudos was a gentleman to his family and neighbors, a loving husband and a loving father, everything seemed alright until his sexual demands began to increase, and it began to impact his wife. When Jerry threatened Darcie, his wife, never to dare visit the garage workroom and open the giant food freezer there, her suspicion began to reach its peak.

When the serial killer who had been raping and killing young women was unmasked, it was hard to believe for everyone, that it was Jerry Brudos, after being brought into a trial, Darcie was accused as well, but why? What role she could have had? The revelation is truly shattering and spine-chilling, that you need to discover from the text.

Another true record of the gruesome crime, The Want-Ad Killer was a serial killer who was sentenced to death and yet managed to live and be murdered again and again. This nightmarish case of serial murders by a man named Harvey Louis Carignan is enough to send chills down your bones because, after his first murder, he managed to beat the death sentence, and continued to harass, rape, and murder young women by using “want advertisements” that was meant to lure women.

These murders continued until the Police were able to put Harvey behind the bars, and extract all the crimes he had committed, how, and why. The details of the murders are truly shattering.

The last book on the list, Don’t Look Behind You is a series of nerve-chilling true crime stories that Ann Rule brings out to warn people. What happens when you are followed by someone on a dead night, should you look back? The answer is just run!

From exploring the case that spanned for thirty years and the killer kept on exploring in four different States until he was caught up in Alaska. To other horrific true stories of Sociopaths, in this collection, you will come across the most unexpected, twisted, and frightening crimes, that are truly nightmarish. Exploring the issues of trusting the wrong person and making tragic mistakes, Ann Rule tries to warn us all through her true records of unimaginable crimes.

That’s all for the best books written by Ann Rule. Each of these books on the list is some of the most popular works of “America’s truest Crime Writer” if you want to discover true crimes that took over America and haunted people for decades, then Ann Rule is going to tell you all. From The Stranger Beside Me to Green River Running Red, each of these books is enough to send chills down your bones, and make you more skeptical while trusting strangers.