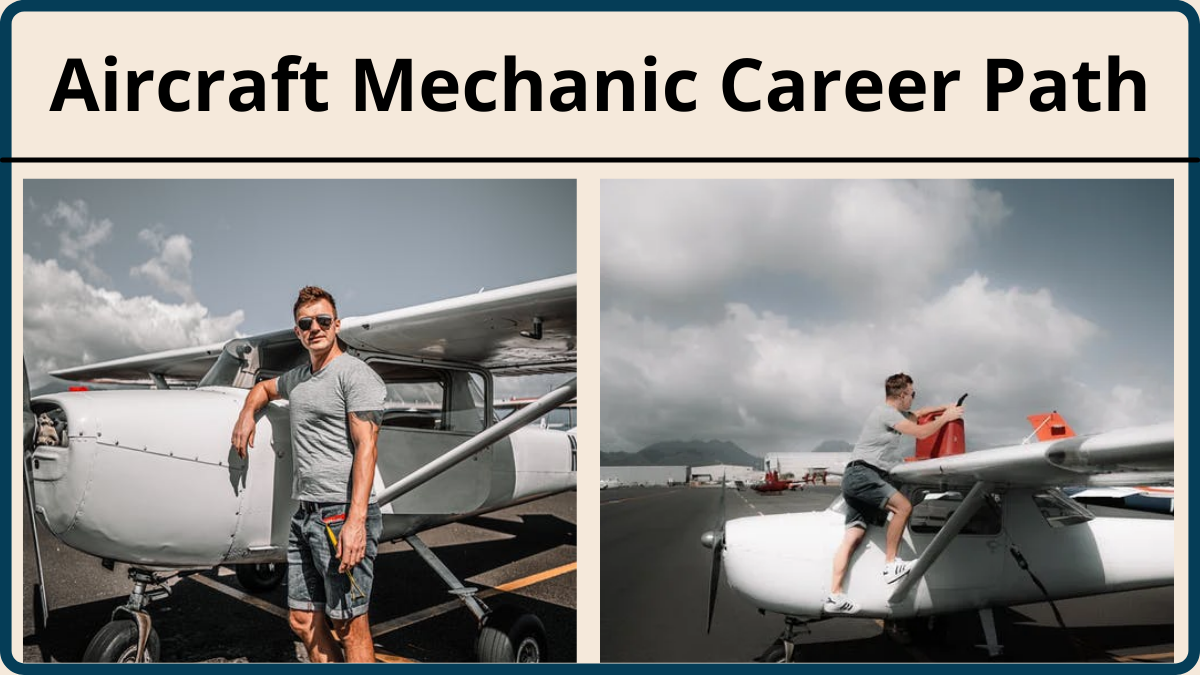 Aircraft mechanics are responsible for the maintenance and repair of aircraft, and they must be able to identify problems and make necessary repairs. The work can be hazardous, so mechanics must be careful while working on aircraft. An aircraft mechanic is a good career choice for someone who enjoys working with their hands and is interested in aviation. This blog post should help you better understand an aircraft mechanic’s career path and cover some of the main tasks that an aircraft mechanic will do.

1. What Is an aircraft mechanic?

An aircraft mechanic is a person who repairs and maintains aircraft. Aircraft mechanics are employed chiefly in the airline, air cargo, and general aviation fields. Mechanics may occasionally work on private aircraft owned by major companies or individuals. In addition to regular maintenance duties such as inspecting, servicing, repairing, and replacing parts of an aircraft’s structure and propulsion system, mechanics remove dents and other damaged areas using hammers, dollies, jacks, and an assortment of body repair tools.

They also dismantle, repair, and replace engines, instruments, radios, and other components. Aircraft mechanics may work on any part of an aircraft during any phase of its existence, from construction to finished product at the end of its useful life. An aircraft mechanic must know how to use tools to service, maintain or repair an aircraft.

2. What Does an Aircraft Mechanic Do?

Aircraft engineers are liable for the work carried out by their team; they must ensure that all jobs are carried out safely and efficiently. They will schedule daily tasks with the team, ensuring that everything runs smoothly within the hangar.

To work in this field, a person will have completed vocational training. During the training, they learn about the different systems on an aircraft and how to work with them accurately. Aircraft engineers must also read blueprints and other technical documents to know exactly what a task requires when a customer gives instructions.

3. What Education Do I Need to Become an Aircraft Mechanic?

To work in this field, a person will have completed vocational training. During the training, they learn about the different systems on an aircraft and how to work with them accurately. Most also earn a degree in aviation maintenance technology or a related subject from a community college or technical school.

You can take several steps to improve your chances of becoming an aircraft mechanic. First, complete high school. Next, pursue a career as an aircraft equipment technician or avionics technician. This will allow you to gain the necessary skills and experience to become an airplane mechanic. You may also choose to obtain your associate’s degree in aviation technology or a related field.

The next step is to complete the necessary education and training to become an aircraft mechanic. Typically, this includes currently attending or have previously attended an approved vocational school or technical school that offers courses in aviation technology. Another option is to attend a four-year college or university and major in aeronautical engineering. Students who pursue this option will also have to attend flight school to obtain the necessary flight hours for licensing.

The final step is to pass the Federal Aviation Administration (FAA) Airframe and Powerplant exams. You must also be at least 18 years of age, hold a high school diploma or equivalent, have no felony convictions and pass security vetting with the Transportation Security Administration.

Aircraft mechanics can start their day at any time, depending on the needs of the airline they work for. They may be asked to show up early to inspect a new plane scheduled to take off soon after. Mechanics may also have night shifts when they will carry out routine checks or deal with any emergencies.

On average, most mechanics work 42 hours per week. However, some aircraft mechanics may put in many extra hours working to meet tight deadlines when the airline is under pressure to get planes serviced and back in the air. They may even have to work nights and weekends, depending on the needs of their team.

5. How Much Do Aircraft Mechanics Get Paid?

According to the Bureau of Labor Statistics (BLS), the median annual wage for aircraft and avionics equipment mechanics and service technicians was $45,550 in May 2010. The top 10 percent earned more than $73,240 a year; the bottom 10 percent earned less than $27,070.

A mechanic with a niche airline may earn a higher salary than one employed by a large carrier. Most mechanics receive more pay when they have completed further training and achieved certification in specialized areas such as aircraft hydraulics, welding, or avionics.

6. How Long Does It Take to Be an Aircraft Mechanic?

According to the Bureau of Labor Statistics (BLS), most aircraft and avionics equipment mechanics and technicians receive their training on the job. Others attend schools offering programs in aviation maintenance technology or a related subject; they can earn an associate’s degree, usually two years. Those who want to continue their education can find programs at community colleges or vocational schools. It takes about four years to complete most associate’s degree programs or two-year postsecondary certificates in aviation technology.

7. The Job Outlook for Aircraft Mechanics

According to the BLS, employment for aircraft mechanics is expected to increase by 10 percent between 2010 and 2020. This growth is mainly due to increasing numbers of planes in service; airlines are adding more flights in response to growing economies. Aircraft manufacturers will continue developing new planes, which could present opportunities for mechanics to work on different aircraft.

8. Do Aircraft Mechanics Need a License?

Some airlines require mechanics to have Federal Aviation Administration (FAA) Airframe or Powerplant licenses, which are given after completing several exams. To obtain these licenses, a person must accumulate at least 18 months of experience as an apprentice mechanic or graduate from a 2-year or 4-year college with aviation maintenance or aviation technology degree.

Aircraft mechanics who work for the FAA do not require an Airframe and Powerplant license because they must be licensed by themselves. To become certified, they need to accumulate at least three years of work experience under the tutelage of another licensed mechanic. They also need to pass the FAA Fundamentals of Aircraft Maintenance exam and an Airframe and Powerplant exam for each type of aircraft they specialize in.

9. What Are the Skills Needed to Become an Aircraft Mechanic?

Some of the skills needed to become an aircraft mechanic include:

Ability to follow detailed plans and manuals – Aircraft maintenance is governed by strict guidelines and procedures, so mechanics need to read and understand complex plans.

Problem-solving skills – Mechanics work on a wide variety of planes and systems, which can require many different steps to solve malfunctions. Mechanics need the ability to troubleshoot problems and figure out fixes.

Attention to detail – Mechanics work on many different parts of the plane, requiring them to identify minor malfunctions that can affect significant systems. They need to inspect every system for any problems that may arise.

Manual dexterity – Aircraft mechanic work often involves working around moving parts or being suspended in the air. Mechanics need to have good hand-eye coordination to perform tasks that require a high level of skill, such as tightening small bolts or replacing parts.

Mathematical skills – To track inventory and analyze data to gauge the condition of planes, mechanics use computers that can generate complex formulas. They may also need to do regular calculations to determine how much weight certain parts can bear.

Stamina – Aircraft mechanics often have to work long hours, incredibly when planes are grounded due to bad weather. They also spend a lot of time standing and may need to lift heavy parts.

10. What Does a Typical Day Look Like for an Aircraft Mechanic?

Aircraft mechanics typically work full time, with shifts that range from early in the morning to late at night, depending on each airline’s flight schedule. Mechanics are often required to work overtime during bad weather or when planes are grounded for repairs.

Some of the tasks performed by aircraft mechanics include:

Many colleges offer degree programs in aircraft mechanics. The best schools will provide students with both high-quality education and hands-on experience with the latest equipment. Some of the top educational institutions where students can study aircraft mechanics include:

WMU’s College of Aviation offers degree programs in aviation technology with an option to specialize in aircraft maintenance or avionics management. The program can be completed full-time in four years or part-time in five years. Students will gain valuable knowledge and hands-on experience with the latest technology tools used by aircraft mechanics, including engine tester, engine analyzer, electronic tester, brake lathe, and more. They will also earn Federal Aviation Administration (FAA) certification at no extra cost.

MSU’s Aviation Technology Department offers a four-year program that can be completed full-time with internships or part-time. Graduates will have the knowledge and hands-on experience to work as aircraft mechanics with Southwest Airlines, Delta Air Lines, U.S. airlines, and more.

CTC’s Aviation Technology Program has been recognized by U.S. News & World Report as one of the top aviation programs in the nation. Students will gain knowledge and hands-on experience with aircraft mechanics tools such as fuel injector tester, spectrometer, and engine analyzer. The program can be completed full-time in 18 months or part-time in 36 months. Graduates will receive FAA certification and work as aircraft mechanics for large commercial airlines such as United Airlines, American Airlines, Allegiant Air, and more.

The Master of Science in Aeronautics offers a Specialized Master of Science Degree in Aviation Maintenance Technology. The program can be completed full-time in four years or part-time in five years and requires a minimum of 30 credit hours and professional industry experience (150 work hours as an aircraft mechanic). Graduates will gain valuable knowledge and hands-on experience with the latest technology tools used by aircraft mechanics, including engine tester, engine analyzer, electronic tester, brake lathe, and more.

UND’s Aerospace Program offers two-degree options for aspiring aircraft mechanics: an Associate of Science in Aviation Maintenance Technology or a Bachelor of Science in Aeronautics with an emphasis on aircraft maintenance technology. Both programs can be completed full-time in four years and provide students with hands-on experience working on aircraft engines and airframes and gaining knowledge with the latest technology tools used by aircraft mechanics, including engine tester, engine analyzer, and electronic tester, brake lathe, and more.

The aircraft mechanic career path is an interesting and challenging one, and it can be an excellent option for people interested in aviation and working on planes. There are many different types of jobs available within the field, so there is room for advancement and specialization. The training required to become an aircraft mechanic is extensive, but it can be a rewarding career choice.